The other night I was watching The Voice and admiring their innovative use of social media to engage their audience. With a Web staff of 10 constantly updating 110 Web pages about the hosts and contestants, the Hollywood Reporter said in 2011 that the NBC hit was already closing in on “Glee” with user engagement. The Voice provides engagement by: fans tweeting their favorite finalists and coaches (often responding), the stars rally viewers for votes; finalists solicit their followers for advice, and producers mine the scroll of memes for comments on song selection, lighting, or Carson Daly’s hair. 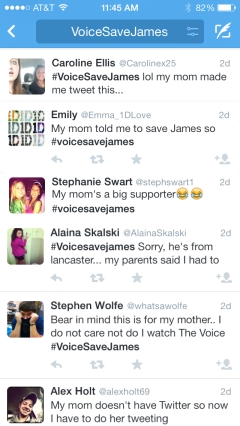 This year fans got another social media treat. As explained by Entertainment Weekly – Voting via Twitter, fans can prevent one of the bottom three singers from going home when Carson gives a signal to start casting votes. For five minutes, you can save your artists by tweeting their first name with hashtag #VoiceSave. Retweeting is a vote, but only one tweet per ID. The singer with the most tweet-votes remains, and the other two go home.

I put this live Twitter voting to the test with one of my local favorites James Wolpert. While tweeting and retweeting #VoiceSaveJames I noticed something strange. A lot of people kept saying they were “tweeting this for their mom.” A look at some of the tweets I collected in the image to the right will show you what I mean.

My theory was that moms watch The Voice, but are not on Twitter and want their teens to save their favorite singer. This thought does seem to pan out when you look at the latest eMarketer report on Twitter use. Between 2010 and 2013, the percent of internet users on Twitter more than doubled for every adult age group except over 65. But as you can see in the chart on the left, 30% of Twitter users are in the 18-29 age group compared to only 17% for 30-49 year olds and 13% for 50-64 year olds.

And who watches The Voice? Recent Neilson numbers reveal that the show continues to win the ratings war among the key 18-49 year old TV demographic – beating out the other networks. And it seems moms are watching with their teens.

HubShout, a SEO reseller and online marketing firm, noticed all this social media activity on The Voice as well. In fact, they developed a SMAP (Social Media Average Points) score that is reported as having predicted the winners for season three and four. A couple of weeks ago HubShout used the SMAP system, to evaluate the remaining season five contestants and predicted the winners to be: Caroline Pennell, Matthew Schuler, and Jacquie Lee.

I guess hind sight is 20/20 and social media monitoring isn’t perfect, but you don’t have to be on Twitter to engage with Twitter and your favorite TV program. How can marketers leverage these social insights during commercial breaks or via product placement? Package goods marketers may have been staying away from Twitter because most of their prime target of middle age moms are not on Twitter, but perhaps we should follow the producers of The Voice’s lead and not let that stop us. Could a food brand consumed by teens, but bought by moms leverage a Voice sponsorship and Twitter campaign?