This year marketers are paying a record $4 million for a :30 second Super Bowl ad to reach a record of over 111.3 million viewers. Yet, for that money it’s not enough, advertisers need their ads to go viral. Knowing what makes a Super Bowl ad buzz worthy is important in this high stakes marketing event. There are a lot of predictions and theories out there, but research my colleague and I conducted found that the underbelly of a great commercial is whether it tells a story or not.

What does William Shakespeare have to do with Super Bowl Commercials? Our two-year analysis of 108 Super Bowl commercials found a significant relationship between dramatic form and favorability in consumer Super Bowl ad rating polls such as USA Today’s Ad Meter and Spotbowl.com. The research pulls from Aristotle’s Poetics and “Freytag’s Pyramid” five act plot structure popularized by dramatist such as Shakespeare to reveal the power of story. 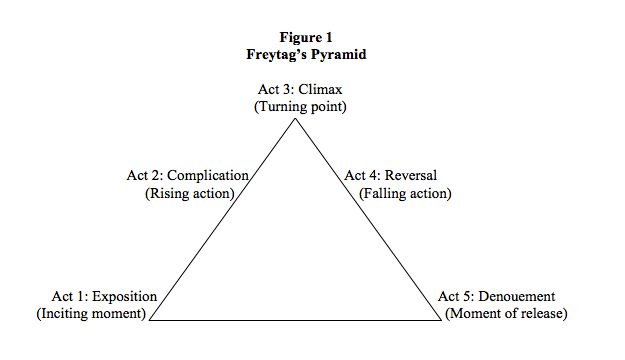 According to Freytag, a drama is divided into five parts called acts, and these acts combine to form a dramatic arc: Inciting Moment, Rising Action, Climax, Falling Action, and Moment of Release. We found that consumer ratings were significantly higher for commercials that follow a full five-act dramatic form compared to commercials that did not. Additionally, the more acts commercials had (3 versus 2) the higher the ratings.

Based on this analysis and advancement of narrative theory, my prediction for this year’s Super Bowl ad winner will be Budweiser’s Puppy Love. Viewers favor ads with dramatic plot lines. Plot is what Aristotle emphasized in Poetics as early as 335 BC.

The power of story has already drawn 30 million views on YouTube and significant press coverage for “Budweiser Super Bowl XLVIII Commercial — ‘Puppy Love'” two days before the actual game and official airing of the spot.

“What Makes A Super Bowl Ad Super for Word-of-Mouth Buzz?: Five-Act Dramatic Form Impacts Super Bowl Ad Ratings” is being published Fall 2014 in the Journal of Marketing Theory and Practice. The more complete a story marketers tell in their commercials the higher it performs in the ratings polls, the more people like it, want to view it, and share it.

What are your predictions for Sunday’s Super Bowl ad winners?