Airlines are the best in social media response.

Today I was to fly to Austin for a conference where my colleagues and I were presenting a paper on Facebook research. That was until Winter Storm Pax hit, which the Weather Channel says has “Paralyzed Nation’s Busiest Airports, Snarls Roads and Rail.” By Thursday morning, more than 5,800 domestic and international flights were canceled, according to flight-tracking website FlightAware.com. Trying to call US Airways took about 8 attempts just to be able to get on-hold. Then after being on hold for an hour and 40 minutes, I thought I would try out the great airline social media response rate with the Tweet below. 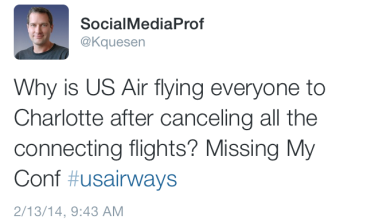 Something we noticed when checking flights at our our airport and the connecting airport what that US Airways was keeping flights going into their hub in Charlotte on schedule, or delayed even while they were canceling in mass the flights out of Charlotte – people’s connecting flights. With turnaround times tight on a normal day, you know those people would not get out.

Why are they flying people to Charlotte only to strand them in the airport? With weather related delays and cancellations, most airlines have policies not to put you up in hotels. Those white rocking chairs in Charlotte are not that comfortable! So here it is 8 hours later and I am still waiting response. I even used their hashtag, so it shouldn’t be hard for them to find me. 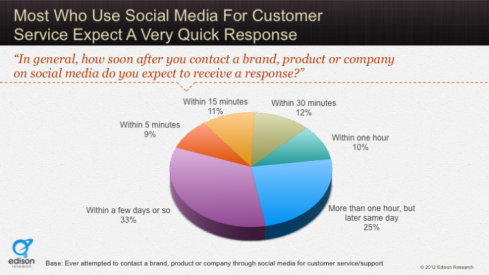 Consumers have high expectations when it comes to social media.

Are consumer’s social media customer service expectations too high? Is this simply because US Air and American Airlines are in the middle of merging operations? Will I ever get to Austin?

UPDATE: I never made it to my conference. Fortunately another author on the research made it from England to present. Day 3 and still no response to my Tweet from the airline. It Looks like Winter Storm Pax won: